After a bit more than two decades of existing on planet Earth, making a list of things to accomplish during the next 364 days on the first of January every year has long passed the stage of being tired to being a source of casual amusement and now, non-existence. Not so much because rules are inevitably broken, but that the blurring of one year into the other is so ordinary as to be insignificant. Although the hands of a clock may inch forward to illustrate the passing of time from 23:59 to 00:01, life goes on without missing a beat. It’s just the start of a new day – like any other day. That being said, the passing of a year undoubtedly bears an air of finality for while we’ll have the chance to hastily scribble ’17th May’ again on some piece of document, we will never be able to use the same full set of numbers once more to denote our present time. 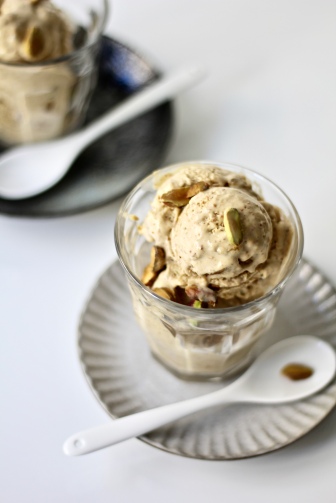 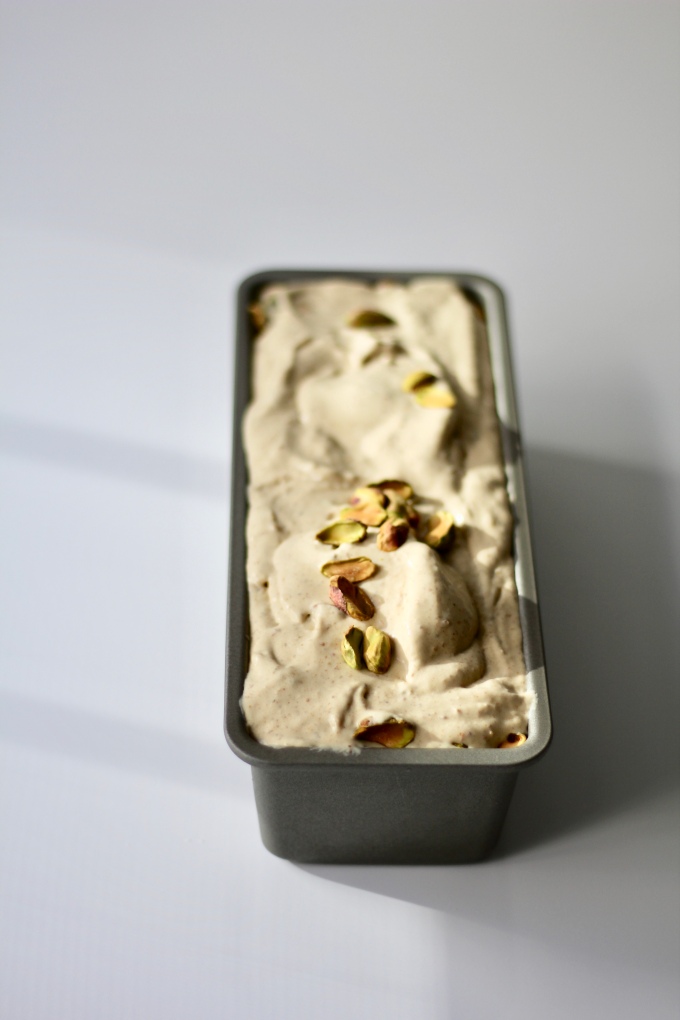 I’m far from the sort to fixate on the irretrievable, but it was interesting to look back on my more memorable experiences of 2017 in the span of a daydream. I started living independently and took on the many responsibilities that accompanied such a lifestyle, visited London for the first time, had my first real unscripted French conversations with the locals in France (although I doubt my French teachers would be proud), gained new friends and reconnected with old ones, started a new blog, and also, discovered the joy of gifs.

Though, admittedly, I wish I had dedicated more time to steering this blog in the direction I want it to go towards, which is hard because that end image is constantly morphing. But I guess, the only way to know what it is for sure is to experiment and then experiment some more. Spring break schedule confirmed. 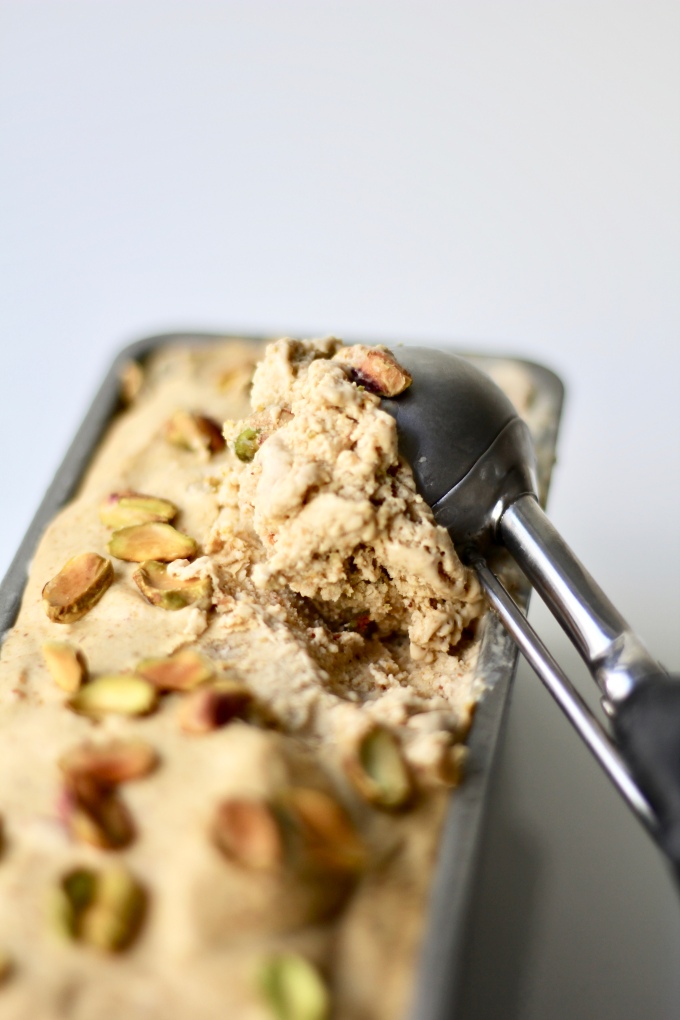 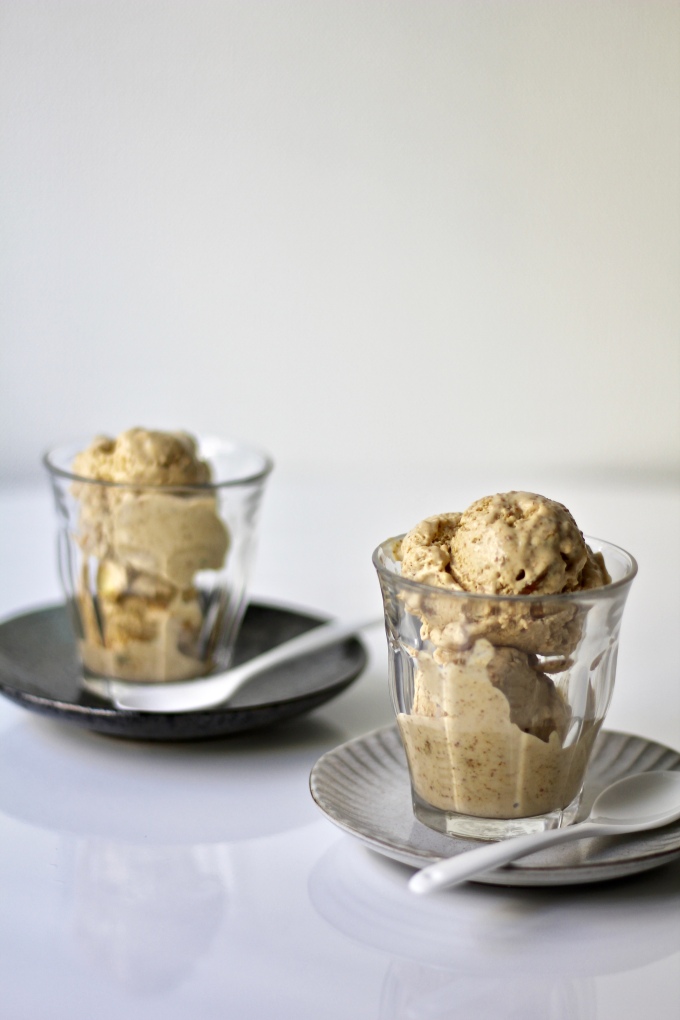 And now on to the true subject of this post – this pistachio ice cream, born out of having an excess of pistachios nearing their expiry date and created sans ice cream maker. The texture of the ice cream isn’t as smooth as what an ice cream maker would yield, but I’d argue that it’s a pretty decent low-effort substitute. Consume affogato style for bliss, dark chocolate optional.

Make the custard: In a food processor, grind 1/2 cup of the toasted pistachios and 50 grams of sugar together until fine. Set aside.

Bring the milk, cream and 50 grams of sugar to a boil in a large saucepan. Whisk in the pistachio mixture and bring the mixture back to a boil, whisking constantly.

In a separate bowl, lightly whisk the eggs and egg yolks. Gradually pour in the hot milk mixture into the eggs while whisking constantly. Pour the egg-milk mixture back into the saucepan and cook over low heat until it thickens and reaches 170 degrees on a thermometer while stirring occasionally with a spatula. Remove from heat and sieve custard into a large bowl. Stir in the almond and vanilla extracts and allow to cool to room temperature. Divide the custard between two freezer bags and freeze overnight.

Break up the frozen custard into chunks using a spatula. It might be easier to let the frozen custard sit at room temperature for a few minutes before attempting to break it up. Transfer the chunks into the food processor and process until the mixture is smooth and lightens in colour just a hint; be careful not to incorporate too much air. I did this in two batches because my food processor is on the smaller side.

Scrape the ice cream into a container, distributing the remaining 1/4 cup of pistachios on top of the layers as you transfer. Freeze until completely firm.