I got a new macro lens! Innovative title I know but that’s sort of the secondary focus of this post (after the dessert itself) because all these pictures are taken with the new lens. It’s strangely challenging to adjust to – the angle at which I have to shoot from is so different from when I use my other one which has a longer range (? even after all these years my knowledge of photography terminology is embarrassingly lacking but I hope you get the gist) – and I’m literally looking at things with a new eye. I quite like the more prominent bokeh effect this lens produces but I feel like I’m not fully maximising its potential somewhat. Hopefully I’ll get better at using it by the next post. Not betting on it though.

Anyhoo, moving on to something I can actually wrap my head around. I made macarons for the first time since I got my new oven and they turned out not half bad, although making the syrup for the italian meringue was a horrible way to start off a day because the candy thermometer was so frustratingly inaccurate I eventually gave up on it after the second batch went wrong and relied on pure sight to gauge when to take the syrup off the heat. I filled the shells with a jasmine ganache which very crucial component, the tea leaves, were given to me by a friend whose tea collection surpasses my plate collection (if you’re reading this – hi!). The recipes I used for the ganache and the macarons themselves are by the one and only Pierre Hermé, just pointing it out here because I’m not including them in this post as the macarons aren’t that integral to this dessert. I simply made them just because. 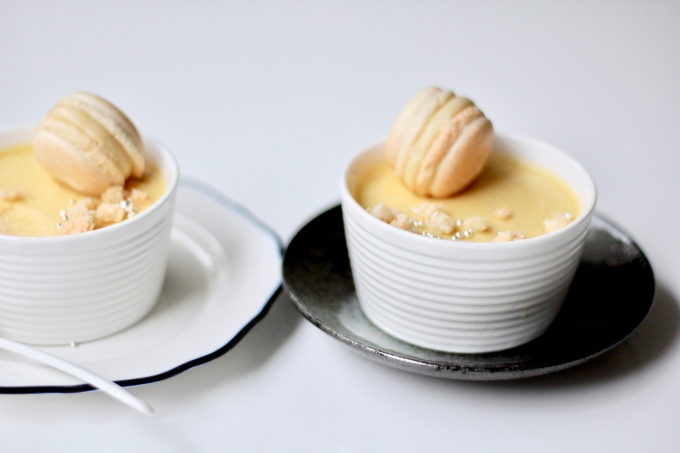 These puddings came about because mangoes are in season – having your actions and choices governed by seasons is the strangest yet most intuitive thing ever – and obviously mango couldn’t be the start and end of it, otherwise why go through all that trouble to turn a perfectly fine snack in itself into something possibly less delicious? Therefore coconut was introduced into the picture and the ramekins of pudding were graced with a macaron each, which, I swear, are becoming an obsession, again. Expect to see loads more on instagram.

A note on these puddings – I felt that the ratio of mango to everything else could have been upped so they weren’t phenomenal, but I’ll include the details here as well as the link I referred to below for the sake of documentation. The macaron crumbles became little stars in their own right because of the texture they added to an otherwise monotonous dessert, which were a pleasant surprise because the macarons were originally an afterthought.

It’s a Saturday night when I’m publishing this (it was supposed to go up yesterday in time for the weekend…) but hope you have a great 48 hours, wherever you are Xx

Peel the mangoes and remove the stone, place the flesh in a blender and blend till smooth. Sprinkle the gelatin over the hot water and stir to dissolve, add sugar and stir. Pour into blender along with the coconut milk and blend until ingredients are combined.

Divide amongst dessert bowls or cups and chill for at least 2 hours, until completely set.